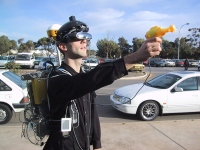 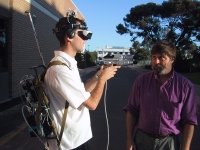 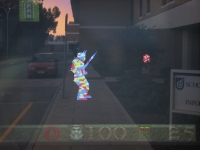 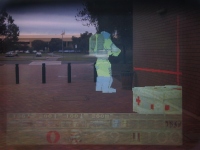 ARQuake is an Augmented Reality (AR) version of the popular Quake game. Augmented reality is the overlaying of computer generated information onto the real world. We use a head mounted display, mobile computer, head tracker, and GPS system to provide
inputs to control the game. Using ARQuake, you can walk around in the real world and play Quake against virtual monsters. Check out the photos below and also the videos section.

Note that we have made some very significant developments in the hardware used for our outdoor AR research. Visit the Tinmith home page to see our latest 2006 system which is our first system designed to be rugged, miniaturised, and very powerful. We can also custom build these systems for tasks such as visualisation and simulation projects. Note that we have also updated some new videos running on the current system.

ARQuake is an Augmented Reality (AR)version of the popular Quake game. Augmented Reality is theoverlaying of computer generated information onto the real world. Unlike a Virtual Reality (VR) world, where the viewer sees a completely synthetic (virtual) environment, users immersed in an AR environment can still see the real world. A classic example of an AR device is the “Heads Up Display” found in Fighter Aircraft. In this case, information about the aeroplanes position and speed or about the enemy aircraft is displayed over the real image of the world outside. The pilot’s understanding of the world they are looking at is increased as extra information is augmenting the information which they are naturally picking up from the environment with their eyes. My research group consists of five honours students, a supervisor and a Ph.D. Student. Our task at the moment is to take all the monsters and the guns etc. out of the quake game and to make them roam around a real environment. We also required the player of the game to move around the real world and have all the monsters appear as though they were standing next to and behind real buildings.We chose Quake for this project as the source code is now freely available, meaning we didn’t have to write our own game from scratch, and even though Quake is getting a little “Long in the Tooth” as far as “First Person Shooter” (FPS) games go, this technology could be added to the latest games.We started by mapping our university campus and building a quake environment out of it. We added our own textures to give a grid pattern, which is easier to see when this image is composited with the real world.

And there you have it!! – well almost.

To allow the player to move around in the real world, they are required to walk as usual. To make the quake world know where the user is is much more complex. We are using combinations of digital compasses, inclinometers, GPS (satellite) tracking and pattern recognition technologies just to work out exactly where we are in the real world, then tell quake about it.Of course there are many problems to solve before this works perfectly. There are issues with the alignment of the two worlds, accurate tracking in the outside world and lighting problems to solve.Even though this is just a game, there are many uses for this type of technology.

Q: Did you actually build this? Does it really work?

A: Yes, the equipment works as described and has been used to produce a number of videos which are available for you to view.

Q: So what exactly is ARQuake?

A: ARQuake is a modified version of Quake from iD Software, designed for play outdoors using augmented reality technology. Augmented reality is  where a user wears a head mounted display (sorta like virtual reality goggles you’ve seen in movies), and the user can see both the Quake game, and also the real world at the same time. We modified Quake to take its view information from a GPS and orientation sensor, and so as you walk around, Quake moves in sync with the real world. Monsters and buildings appear to sit in the real world as though they were really there, and then you can play a game of Quake while you are in the real physical world.

Q: What kind of tracking equipment do you use for this? GPS is only accurate to 5 metres!

A: We use expensive surveying grade equipment in order to supply the software with highly accurate position and orientation values which are orders of magnitude better than what can be achieved using standard grade equipment. The Trimble Ag132 GPS uses differential signals and extra signal processing in hardware to achieve 50 cm accuracy at 10 updates per second, at a cost of US$4,000 (compared to 5m accuracy at 1 update per second for a normal GPS costing US$200). We use an Intersense IS-300 sensor which uses both magnetic and gyroscoping tracking for fast sensing of head orientation, although it does drift due to magnetic distortions in the environment.

Q: I am a member of the media/press and would like to use your photos or videos, what should I do?

A: Please contact the lab explaining what you would like to do and we would be happy to give you permission to use our photos, we can send you high resolution versions suitable for publication.

Q: Can I come and play ARQuake at the lab?

A: Unfortunately we are very busy with our research work, and it is not possible for us to demonstrate the game to everyone as we get quite alarge number of requests for this and we need to get some work done :) Also, since the backpack is used for other tasks and is constantly undergoing modifications, it is not always in a state where it is able to be used on demand. Since the amount of time required to set up a demo is quite large, we tend to only do them on CIS school open days at the university, at conferences we attend, and by special invitation.

Q: Can I buy an ARQuake system? I want one to use outside at home!

A: Well, the answer is probably no, due to the price of the equipment being prohibitive :) For example, the major hardware components alone are probably worth more than US$10000 (Laptop + GPS + IS-300 + HMD) and then there are additional costs for the custom backpack, cabling, cameras, hardware controllers, and software installation. So we are talking serious money here – unfortunately the technology has not reached a point where it is possible to buy this equipment cheap enough that it could be sold to the mass market at an affordable price.

A: If you look at the videos and pictures, you will notice that in most cases the video is transparent, using video from the real world. We add a small number of objects, such as monsters, doors, etc, and we want these to be highly visible. Quake is generally a very “dark” game, with lots of gloomy shadows and dark areas, but these effects are not very visible on a head mounted display when used outside. So, with ARQuake, all the lighting effects are disabled and objects have had their colours boosted to make them as visible as possible. This also helps to improve the realism by making the lighting in the game similar to the lighting in the real world during the day – which is not generally dark and gloomy. The other reason for using Quake-1 is that the source code is available under the GPL license, while Quake-3 is not. We need to make modifications to the source code to do the position and orientation tracking, as well as the video overlay, and this requires source code.

Q: Why don’t use use Unreal Tournament/Counterstrike/etc instead of Quake, its my favourite and so much better?

A: As with the previous question, you have to ask what is actually better, and will it make a difference to the AR gameplay. For rendering quality and lighting, we tend to turn most of these features off to make the display reasonable outside, so this is not important. Secondly, most newer engines tend to have better AI for the monsters, but we don’t really want them to be too smart for ARQuake. The reason is that when running around outside, it is not possible to move at the same speed as on a desktop (see the next question), and so if the monsters are too smart and too fast, they will always beat you. In Quake, we use monsters which are intentionally slow and not too powerful to give the player a chance to actually beat them.

Q: Does ARQuake work with multiplayer?

A: Yes, since it uses the standard Quake engine, it is possible to use all its multiplayer features. For example, you could have two people outside playing against each other with a wireless network, or one person outside playing against a person indoors on a desktop machine. You should note that the person on the desktop will always win because when you use the mouse you can turn and run at a rate which is much faster than is possible in real life.

Q: I’d like to be employed as a coder on the ARQuake project, what can I do?

A: Our main work is in research and making prototypes to demonstrate technology, not to make products for the mass market. The ARQuake prototype is now at the point where it does pretty much everything we want, and we have a number of good videos and pictures showing this in action now. Apart from small changes to keep the software working with the latest backpack hardware, there are no further features to be added to the software.

Q: What further features are you thinking of adding?

A: Unfortunately Quake (as well as all games) have limitations in the way certain parts of the game work, and so this means adding other things we would like to do become impossible or very difficult. For an example of an augmented reality system which is much more complex and takes advantage of
new user interface technology, check out the videos for the Tinmith project which is a full blown AR modelling application for use outdoors, with glove based user interfaces to support CAD like functionality.

ARQuake has produced a number of publications, here is a current list:

So you want to see what its really like to play ARQuake? We have a number of videos here that show what the user experiences when they are playing the game outdoors. We have produced new videos in 2006 that show our latest backpack system running ARQuake outdoors. We also have other videos of Tinmith running outdoors doing 3D modelling and walk-through examples. There is also lots of videos on youtube.

Note that all our AVI videos are encoded using DivX codecs, and MPG videos are MPEG-1 files